(Click on the plant name below to go directly to that plant. Allow a few moments for pictures to load) Please note we cannot accept any responsibility for the advice or recommendations contained here which are given in good faith. Caveat Emptor.

The pictures and notes below show some of the marvelous orchids that members of the Garden Club grow. Of course the real experts are the T&T Orchid Society. Go to their web site at www.ttorchids.net or www.ttorchids.com and click on "Database" so see more. 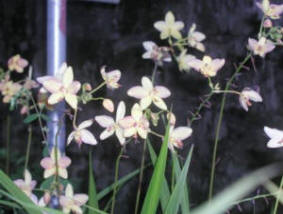 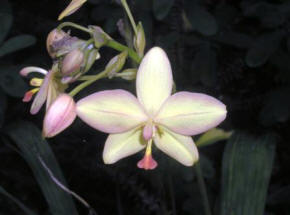 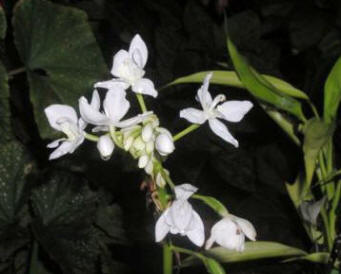 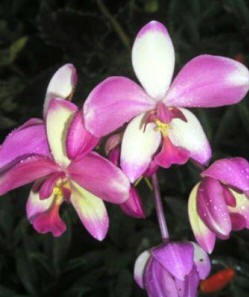 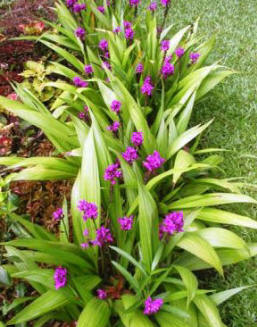 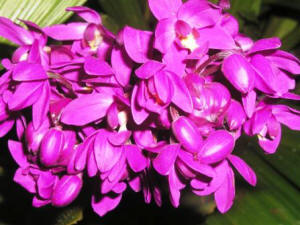 The orchid genus spathoglottis is a remarkable garden orchid. It is a versatile plant as it can be grown as a potted plant or as a landscape plant, and has been grown in Trinidad for many years enjoying considerable popularity. Within the last few years, there has been a resurgence in its cultivation. This has been due in part, to the introduction of new hybrids by individuals as well as commercial growers. These hybrids for the most part differ in terms of colour and sometimes form.

The spathoglottis orchid group has more than 40 species in its genus. It naturally occurs from South-West China and North-Eastern India, the Indochina peninsular throughout Indonesia, Papua New Guinea, Northern Australia extending to New Caledonia and Fiji. For many years it has also been grown in the Caribbean with fairly spectacular results.

Traditionally, the most widely grown specie in the Caribbean has been Spathoglottis plicata. This normally has unicolour purple flowers. Other varieties include lilac, white, various shades of pink and even bicoloured varieties. They all make lovely bedding plants and can be quite prolific, providing a vibrant splash of colour. They also grow best if planted in some shade. Generally they tolerate morning sun quite well. The one detracting factor is that the flowers open sequentially and the spray keeps growing, eventually this results in a long and twisted spray of flowers with black residual parts leftover from where it had blossomed before. This is not always very attractive, but take consolation in the fact that there are normally several sprays at a time.

Several years ago, a new specie was introduced into Trinidad , Spathoglottis ungiculata, commonly called "grapet". This is a particularly attractive variety as it is an intense shade of purple mixed with fuschia. The stems remain straight and possess utility as a cut-flower variety. The flower heads are also round and compact and fragrant, possessing a fragrance reminiscent of grape soft-drink, hence its cultivar name.

Within the last two years or so, a peachy-yellow variety was also introduced Penang Beauty. The flower head on this variety is also quite large but not as compact. Its most attractive feature, apart from the beauty of the blooms is the longevity of the blooms. Once in flower, the spray [sprays] lasts for several months at a time and en masse is reminiscent of a field of daffodils. They really are extremely beautiful. This particular variety, however, grows best as a potted plant. This is not to say that they cannot be grown in the ground, but they are not as vigorous as other varieties, so one has to be a bit cautious.

From the standpoint of hybridising, these introductions present a fantastic opportunity as they broaden the gene-pool with beautiful and diverse material, thereby facilitating the creation of new hybrids. This brings me to another significant attribute of the spathoglottis genus, they are easily fertilised by bees, butterflies, and other insects. Once this process is completed one would notice a small pod[s] on the flower stalk. Eventually this pod would mature, and if not reaped would split sending thousands of seeds into the air. These seeds germinate readily and in effect can create new and natural hybrids. For those who love the whole nurturing process, this presents you with a fantastic opportunity to grow a plant from its juvenile stage into flower. Remember this would be your very own hybrid, originating in your garden and could produce something different and unique. I know that Suzanne Majani and Sandy have had success in flowering such material.

Generally, spathoglottis make attractive bedding plants, border plants or can stand beautifully on their own as potted plants. For best results, they require a well-drained, porous soil that contains organic matter. This can take the form of rotted baggasse, rotted cow manure, rotted compost material and such. From experience, I can say that as they grow, the base of the plant somehow comes up to the surface and would require topping up with medium. Also, damaged or old foliage and flower spikes should be removed. Not only is that for aesthetic value, but also for the general health of the plant, which is to say it may aid in preventing insects from infesting the plant. If one were to look at the foliage, one would notice that the leaves broaden considerably with age and also recurve providing an ideal spot for mites and thrips. The removal of unwanted leaves therefore should aid in minimising such an occurrence. ( There have been documented cases of this in the US and I have also observed this in my experience with spathoglottis). This exercise also seems to prompt increased prolificacy, I myself have noticed this, and as part of my gardening regimen routinely remove unwanted foliage. The last point I would like to raise is that to ensure optimum results, one should also avoid excessive drying-out, not only is there a correlation between that and pest activity but also in producing healthy flower spikes that go to full term rather than be aborted before opening.

ORCHIDS PICTURES
Sandy, Dick Hobday, Michael Lazzari, Peter Moll and Rodney de Boehmler kindly supplied the following pictures of Orchids from his extensive collection.
Just click on an image to see a larger view. Click the "Back" button on the top left of your screen to return to this page. 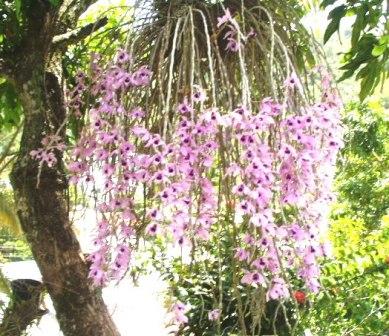 This orchid is 45 years old, hanging on a mango tree in my garden in Cascade. It blooms richly every year at this time. .....Marlene Davis....2006